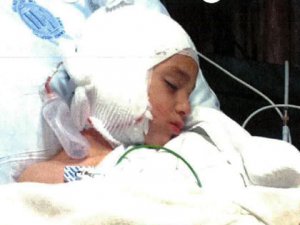 A Manhattan pediatrician whose 80-pound dog, Archie, is notorious for being “vicious and dangerous” took the pooch to a Long Island elementary school playground — despite signs banning dogs — where it promptly attacked a 6-year-old boy and chewed off his earlobe, a scathing lawsuit charged yesterday.

Levine had brought the hulking black Labrador mix, Archie, on a leash on May 18 to Philip Sousa Elementary School in Port Washington, LI, where Andrew’s brother was playing a baseball game, Esposito said.

Levine, who is a professor of emergency pediatric medicine at NYU School of Medicine, owns the dog with her urologist husband, Dr. Michael Levine.

Suddenly, “I heard a noise, like something you hear in a bear attack — just a horrible noise,” Esposito recalled.

Esposito, 39, turned to see 45-pound Andrew lying face-down and crying in the dirt — with half of his right ear lying nearby.

“They couldn’t reattach the half that was taken off,” Esposito said. He said his son now faces “many” plastic-surgery procedures.

The still-shaken Andrew since has been kept home from kindergarten — and “thinks his ear is growing back,” his dad said.

“This child is going to be significantly disfigured for the rest of his life,” said Esposito’s lawyer, Rosemarie Arnold.

Arnold also said Archie “is known around the neighborhood as having vicious propensities.”

Deborah Levine refused to comment from her Port Washington home.